CLOSE ✕
Get in Touch
Thank you for your interest! Please fill out the form below if you would like to work together.

Thank you! Your submission has been received!

Oops! Something went wrong while submitting the form

Snickels and the Bandit: Tales from the Ad World

When I was a young soldier in the US Army I spent a whole lot of time trying to make the days go by as fast as I could. Sweeping motorpool parking lots and sweating over a never-ending game of Spades in the desert heat provided some distraction, but a day in the Army is like three days in the civilian world. It's kind of like dog years, but with worst food and more dry humping.

Suffice it to say, the days were mostly spent by the constant barrage of taking insults and joking about someone's shortcomings. Now, this was before the days of "don't ask - don't tell" and "stress cards"- so nothing was off limits. Hell, I remember when my First Sergent came across some of my nude figure drawings that I stashed under my barracks bed during a room inspection. Unbeknownst to him, I was secretly taking some art classes at the Smithsonian when I was off duty to try and trigger the "art gene" again. As he was flipping through the papyrus piles of charcoal renderings, I felt the drips of sweat race down my forehead. Amid the sketches of classic, female poses, I remembered one of the first live sketches I snuck off to do featured a nude, male model. The interaction that followed was akin to a mother finding her son's Playboy stash then calling him derogatory names and telling all of her friends. The months that followed until my discharge were filled with school-yard heckling and interesting pictures drawn on my door's white board - but, damn if it wasn't funny.

There was no shortage of "finding the funny" in military life. It made the worst deployments bearable and was the one thing that could bond everyone - regardless of race, gender, or rank. When I made the transition over to the civilian world, my biggest fear was entering a profession where there wasn't some good-natured hazing, embellished story-telling and comradery shared over a funny mishap or social blunder. Creatives are a kind group and I like that. We don't go "in for the kill" like most of my battlefield brethren. We observe, analyze and pick apart something that most people wouldn't even notice. Something as simple and unsuspecting as a name on an email.

I first became aware of "Snickels" at my first real job in advertising. It was a firm outside of Baltimore that was inhabited with with some really creative and diverse people. I was a lowly production designer who specialized in begging for any opportunity to make a logo or write a clever bit of copy. As they say in the Army, "that was above my pay-grade". Until I proved myself in the trenches, I was mostly responsible for resizing ads for a variety of our clients. One such client was a young, aspiring woman named Susan Nickels (first name has been changed). When Susan would email me changes to copy or dimensions, her email came across as "snickels@hercompany.com". This always provided me with a quick, immature giggle and a saddled nickname for one of our most demanding clients. No matter what minutia Susan wanted, or how fast she wanted it - it's really hard to get upset  at someone you call Snickels.

A few months and a thousand emails later, Snickels eventually had to physically come in to the office to go over some new creative work and logos we were developing. That morning I recall spending extra time choosing an outfit. Would Snickels prefer a black Velvet Revolver shirt, or was she more of a pristine Polo type? Does the ripped hole in the knee of my jeans scream, "I'm a hard worker, or does it come across as sloppy? This wasn't a romantic curiosity on my part, but a validation of what I imagine a "Snickles" to look like and appreciate.

Promptly at 9 AM, Snickels entered the office, and to this day I can't remember what she looked like (or if she commented on my music taste - I opted for the Velvet Revolver shirt). All I could focus on was the mysterious figure that loomed over her like the Grim Reaper stalking Keith Richards. There, shrouded in an engulfing, black turtleneck sweater stood a woman whose silent presence was only matched by her defiance to wear breathable cotton in late June. She was not introduced to us, nor did anyone from the Creative Director to the AE's, know who she was.

The meeting began and Snickels listened intently as we presented her with our new, creative ideas. While she took in the presentation and sipped her coffee, my attention was on her counterpart. The formless, emotionless woman in black whose only sign of life was pulling her black turtleneck over the bottom of her face and sternly glaring at the images in front of her. I stared and realized that after about 20 minutes, I had NEVER SEEN HER WHOLE FACE. The black band across the bottom of her face reminded me of documents that the government would release with the really TOP SECRET information concealed with a thick black marker. Whatever advantage we had to push these new, bright ideas on to Snickels seemed devoured by the dark vacuum of this woman's attire and disposition. She was stealing the vibe and the attention of the room with her masked face, silence and angry eyes, She was a bandit.

Snickels and the Bandit sat side-by-side looking over our ideas. Snickles wasn't the warmest person, but she did speak and had a grasp of our vernacular. She was no-nonsense, all business, but you could get an impression of her reaction to our presentation by a thin smile or a gentle nod. Not Bandit. Bandit sat quietly, glaring at the table with her red, glowing eyes. I imagined that the turtleneck around her mouth was covering sharp, ferocious teeth that were salivating at her chance to rip into anyone who asked who she was.

As the meeting came to an end, so did my expectations of finding out the Bandit's identity and motives. The JFK assassination, The Loch Ness Monster, and Area 51 were peanuts compared to this. Maybe the answers would come in time over the national news or an episode of The X-Files. As the Creative Director pulled out his calender to set up another meeting, there was some confusion and back and forth between him and Snickles.

"So, would Monday at 10 work for you?" The Creative Director inquired.

"What about Thursday after...."

"WHY DON'T YOU JUST TELL US A TIME!" Bandit scolded under her turtleneck.

Silence and surprise fell over the agency. Her booming voice made my knees buckle from under the rip in my faded jeans. My Creative Director apologetically offered a "just let me know what time works for you" as Snickels calmly grabbed her purse. Bandit's eyes were locked on the door as her body was heaving from her outburst. The two left and so did my reservations about leaving the military.

After the initial shock we all sat around and laughed at what transpired and made up a compelling back story for Snickels and the Bandit. Each of us threw a piece in like some community quilt and the legend grew over the few years I was there. For the first time as a civilian and graphic designer, I knew that I was in the right business.

I never found out who the Bandit was and my interactions with Snickels continued through emails and the occasional phone call. Maybe it was for the best. My imagination and the tales my co-workers and I had concocted had to be more interesting then the reality.

Part of our job as graphic designers and illustrators is to tell (and sell) that story. Reality and complacency can hide a really good message and it's our job to filter through ho-hum and highlight the abstract. Spinning the context and magnifying the unknown is essential for setting you apart from your competition. Like this memory, your story should be unique, engaging and entertaining and sometimes it requires an outside orator to boil down the boring and craft your message.

Remember- no matter what stuffy tale you're telling - whether it's Proctor and Gamble or Johnson and Johnson - somewhere there's a Snickles and Bandit. 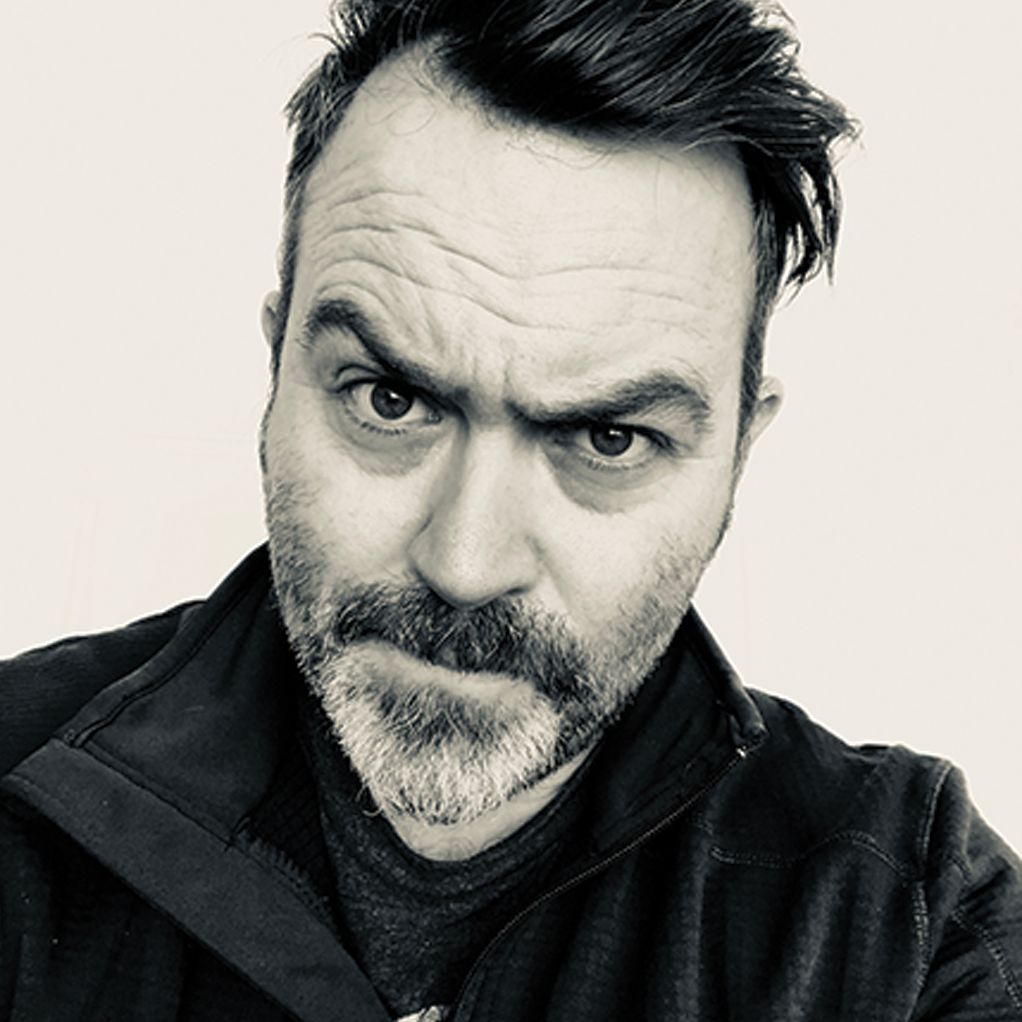 Garth Gerhart
A creative spirit living in a material world.

Concept to Completion
Written by
Startups
Dr Know: The Clients of The Design Industry
Today I discuss the different types of clients and how you, as fellow designers, can use some humor in identifying who's on your side, who's on your back and who's on the fence.
Written by
Garth Gerhart
Branding
Little Orphan and Me. Is creating spec art worth your time?
Without a paying client, an advocate on the inside or a partner that shares your vision, it’s all on you. The Single Parent Designer.
Written by
Garth Gerhart
Branding
Fearing the Unknown. The Process of Rebranding
Change is never easy and it can be scary to take the first step. Many of my clients eyes widen and start to sweat when they hear "rebranding". It's a daunting term that conjures up images of money floating away and stable customers being lost in the woods. By understanding the process of what you get and seeing the steps it takes to get there, you can get a better understanding of where your money is going and how it can bring new light to an otherwise dark time.
Written by
Garth Gerhart
Startups
5 Things you should never say to your Professional Designer
The Designer/Client relationship is special and, like any relationship, there are ups and downs. Here are 5 things to avoid saying to your designer to ensure a "Happy Ever After."
Written by
Garth Gerhart
Web Design
(De)Sign of the Times: Small Business vs. Big Virus
Another year and another catasphoic disaster is on the horizon that threatens to rid our world of Baby Boomers and... toilet paper!? Alas, when the world turns in to a dirty, smelly version of Logan's Run - small businesses will still need to peddle their wares in BarterTown or at least fight in the Thunderdome.
Written by
Garth Gerhart
Let's HOOK UP!
Contact Me